Getting Things Done is Hard 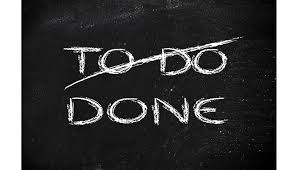 Dreaming is fun. Talking is easy. However, getting things done is really hard.

Most organizations develop detailed and lengthy plans. There is a minor problem though: most plans never come to fruition. Just look around you. Virtually all organizations talk about what they plan to do in lofty terms, mistaking their verbosity for actual results. Size is a natural enemy of getting things done. Governments and large organizations are a good example of this phenomenon. Numerous layers of management lead to greater bureaucracy, lengthy processes, less accountability, all of which then result in lesser productivity.

Size can be an inhibitor, but so can one's actions. How would you rate yourself? Do you regularly make deadlines? Did you finish that project you committed to? Is your inbox cleared out? Have you called your parents recently?

Entrepreneurs view themselves as people of ideas and action, and they are. But some of them also think of themselves as visionaries, dashing around, formulating ideas and directing action. Before anything is actually done, the word goes out - "Hold it"- the visionary has a new idea.

While it can be exhilarating to play the lead role, chaos, bedlam, frustration, fear and ire are often the end result. An excerpt from a 2015 Fortune article titled "Jawbone: The trials of a 16-year-old can't-miss startup," described the story of well-loved entrepreneurs with big ideas who often missed product deadlines. After 16 years they are still in the startup phase. Another article talks about "Fab the design-focused e-commerce site that said it would generate $250 million in revenue in 2013. It ended up bringing in around $100 million...Fab shrank from 750 employees to 150." Ideas and execution are different creatures.

Shakespeare was evidently thinking about this when he developed the concept of "Prattle without Practice" in Othello. I have encountered many prattlers in my business life. Sometimes people prattle because they think their role as the head honcho demands it. Humans also babble when they are either bereft or have an overabundance of ideas. I plead guilty too. I love discussions and I take great pride in talking to the rank and file about all sorts of ideas. The problem is that when a boss utters an idea, it is sometimes hard to distinguish between an edict and an unformed suggestion that can be safely discarded. At the end of my first year of running a very large business, I was asked what the most important lesson I had learned was. "How to keep my mouth shut," was my answer.